I make no apologies for stealing the title for this post from Morgan Scott Peck’s best seller, The Road Less Travelled, as it was perfect for a post about how I discovered the region of Abruzzo. Most blogs and websites about the region say that Abruzzo is Italy’s best kept secret; I’ve even used that phrase myself in the past, but as more people discover the region it’s becoming an obsolete expression.

I first discovered the region nine years ago. We were in Italy again, looking for a location in which to buy a holiday home and we were having a mid-week break in Rome. One day we hired a car and just drove across the country and ended up in Abruzzo. We liked what we found and the following year we made the effort to come here. We stayed in L’Aquila and explored the surrounding towns and villages. Our property search then took us south to Calabria and Basilicata and when we returned to the UK we re-evaluated our situation and decided to concentrate on Abruzzo. Another trip over was booked and this time we fell in love with the small village of Fossa about 14 km from L’Aquila.

The 2009 earthquake brought the region to the attention of the world and people started to question where this secret part of Italy was. We then booked a stay at the fabulous Villa Collina just to be sure that our heart was in Abruzzo and that the earthquake hadn’t put us off. Our hosts Bryan and Cilla invited a hoard of ex-pats over for a party and in between drinks and nibbles people told us their stories about how they discovered the region.

Television shows like A Place in the Sun and travel shows have been drawing attention to the region for the past few years and this has increased the tourist footfall. And now more people now know of the region that measures just 10,794 sqm and yet boasts the largest green space in Europe and three national parks and, in my opinion some of the nicest medieval villages in Italy.

One of the benefits of being a road less travelled is that property prices here are quite low compared to the national average, wildlife flourishes in the many undisturbed corners of the region and the towns and villages retain much of their historical culture and identity. As more people visit the region there are subtle changes occurring, the younger generation are following global trends, local people are now travelling further afield to discover more about their country and local trattoria’s are filled with English speaking diners.

My search to find my personal piece of Italy has led me here to Abruzzo and would I change any of it?

Yes – I’d have discovered it sooner rather than later. 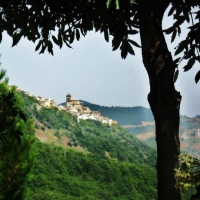